Starting out in Kaitaia

Late in 1913, BNZ decided on opening its northernmost branch. Hoping to avoid a rival bank setting up ahead of them, the plan was kept quiet. Mr Kenneth Hume, 'an active and zealous young officer' was appointed Manager and Mr Herbert Doidge as assistant.

The two set out from Auckland by steamer in January 1914. They carried with them a supply of cash, books, stationery and other banking equipment in a large Gladstone bag. From Mangonui, the journey to Kaitaia was by coach. Lifting the heavy bag onto the front seat, the coachman remarked that it felt as if it were full of gold. The coachman was nearly right, although he did not know it.

Upon arriving at Kaitaia, the first job was to find a suitable place to open up shop.  As Mr Doidge minded their bag at the hotel, Mr Hume scoured the town for an office. Not a very promising task in the small township.

Eventually, the local saddler agreed to provide them a store room at the back of his shop, situated at the far end of the town. The room was cleared and a bed, table and chair were installed.

By day, customers sat on the bed while discussing business with the Manager across the table. At night, the Manager slept on site, with the bag of cash hidden beneath the bed.  These arrangements continued until more suitable offices were later secured nearer the centre of the town.

Mr Hume and Mr Doidge outside their new office, completed 1915. 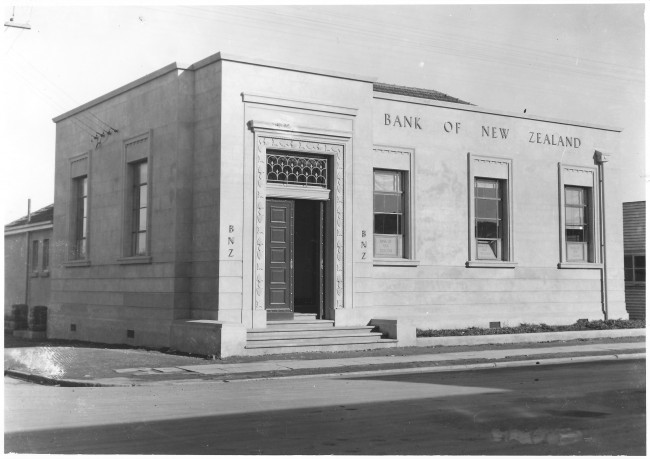 A later premises was built in 1947